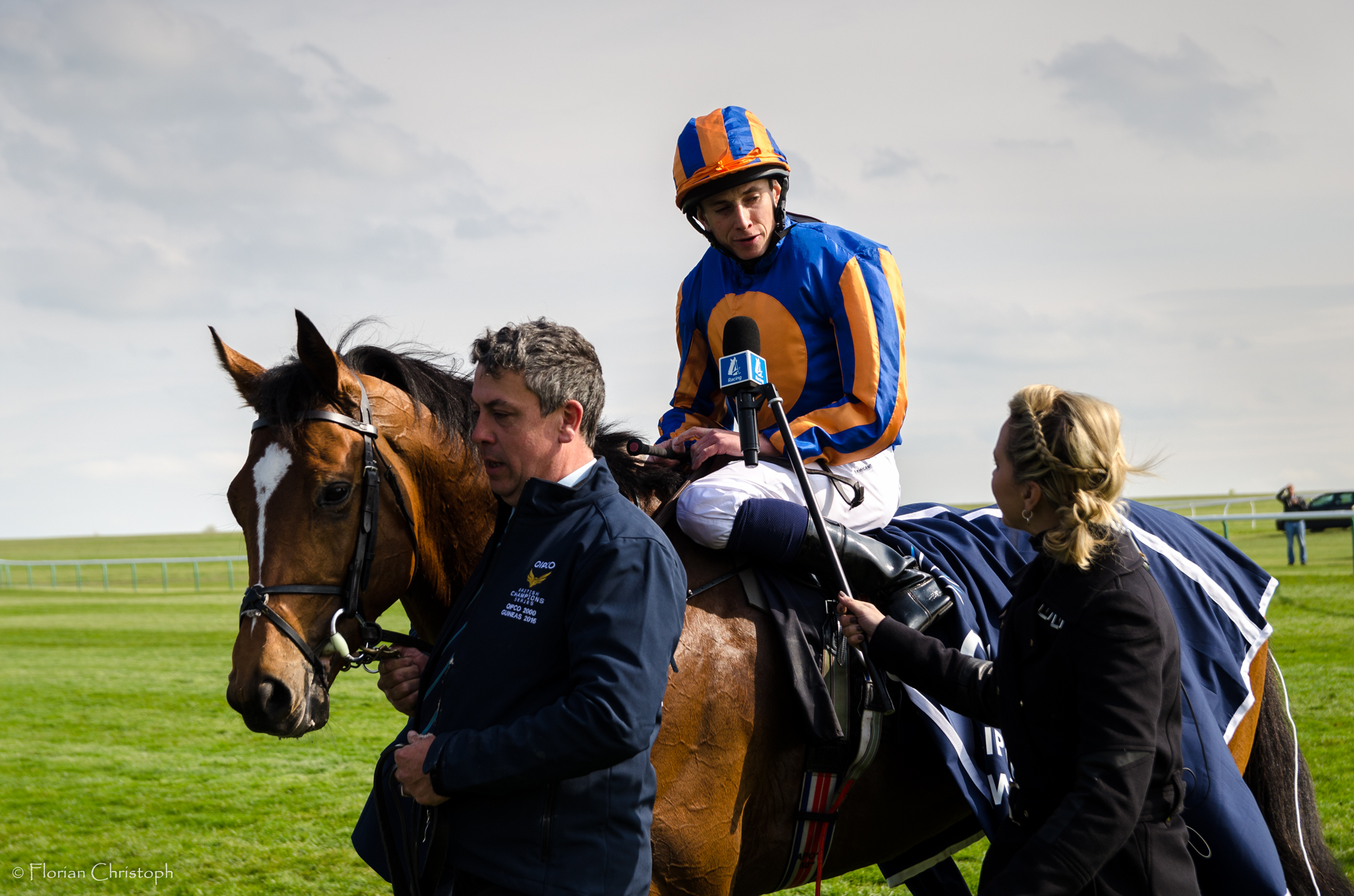 Saturday 5.45pm – The race that promises to be the race of the season won’t be what we all hope it will be. The clash of Gleneagles vs. Golden Horn is unlikely to materialize yet again as the weather god doesn’t want to comply with the prayers of racing fans. The rain arrived in Dublin early Friday afternoon. Since then it was a mix of drizzle and lashing. It’s hard to see the word “soft” not being part of the going description at Leopardstown….

That’s the worst case scenario. But hey, this is Ireland! You can’t trust the weather gods. What about a bit of Indian summer on Saturday? Well, we’ll wait and see.

A hopefully more or less dry night should ensure at least that John Gosden feels encouraged to let Derby winner Golden Horn take up his assignment in the Irish Champion Stakes. Gleneagles – we can be sure – is going to be withdrawn by midday latest, should the rain persist.

Now, that might be sad and disappointing, but thankfully doesn’t mean that the race turns into a dull affair. Not at all! One could argue the rain adds to the intrigue.

Assuming Golden Horn runs, he’s obviously the horse to beat, despite his recent defeat in the Juddmonte International.  No, he’s no superstar, though still a really good horse. It’s been his only below par run – if you can call it that way; a runner-up effort, beaten by a neck, in a muddling affair, which is what the International was.

But Golden Horn won the Derby and Eclipse in convincing style. The memories of him putting away top class Jack Hobbs at Epsom are certainly still fresh. Without the shadow of a doubt, John Gosden’s “starrider” warrants the upmost respect.

High class yet fragile – these are the attributes of Dermot Weld trained Free Eagle. He has been one of the start attractions on each of the last two Irish Champions Stakes days at Leopardstown. In 2013 he went off the 2/5 favourite in a Group 3, having earned dramatic quotes for next years Epsom Derby after an impressive debut win. However his hops where shattered that day…. by a certain horse called Australia. Subsequent injury problems made him lose almost an entire season then.

He came back after a year long absence and smashed a fine field in the Group 3 Enterprise Stakes on the inaugural Irish Champions Weekend. Heavy ground was against him in the British Champions Stakes subsequently, but after another lengthy absence he made a winning return at Royal Ascot to land the Prince of Wales’s Stakes.

While this form gives him a big chance in the Irish Champion Stakes, given that he probably wasn’t 100% at Ascot, and may well improve again, it is the ground that really worries me. Free Eagle is clearly best suited by fast conditions. So any rain must count against him.

Found is one of those horses I find difficult to assess. She has done well over a mile this year. Just beaten in top class company by narrow margins. She then stepped up to 10f and won in tremendous style – albeit only in Group 3 company. Personally I wasn’t sure about her stamina given her dam side not instilling too much confidence.

But question mark, more than anything else, is whether she is good enough in this extremely deep race. It’s by far the toughest test of her career and while the ground may not be a problem, I fear she’s likely to fall short over this trip against this classy opposition.

If you want, you can make plenty of excuses for The Grey Gatsby this season. He’s never encountered his ideal conditions, albeit performed still with plenty of credit on most occasions. But it seems that everything has to fall right for him in order to win these days. He’s out to defend his crown, which he won in such dramatic style twelve month ago. I’m surehe won’t down with a fight once more, but it’s been too many excuses for The Gray Gatsby now to make me believe he has what it takes to regain his title.

Cirrus Des Aigles has been a legend for a number of years now and there are no signs of him slowing down. His most recent performance when finishing last at Longchamp can easily be ignored as he lost a shoe during the race. He won the Group 1 Prix Ganay earlier this year though and judged on that performance appears to be as good as ever.

Whether that is good enough to win the Irish Champion Stakes remains to be seen. One thing is for sure: He’ll appreciate any single drop of rain. The more the better for him.

Fillies should find it tough in this deep field – however Jim Bolger’s hardy filly Pleascach can’t be underestimated. A winner of the Irish 1000 Guineas and the Group 1 Yorkshire Oaks, she has top class form in the book and acts on any kind of ground. However it seems she might be even better with a bit of cut in the ground – so any rain falling is hardly an inconvenience for her.

She has obviously a bit to find on official ratings, however may well be able to progress further. With conditions sure to suit, she rates a big danger for anyone in this field – in my book at least – and I feel she doesn’t get the credit she deserves.

The same could be said about Highland Reel, who is back in Ireland after a successful stint in the USA where he won the Grade 1 Secretariat Stakes. First time lasix and fast ground clearly worked wonders. But he won’t find the same conditions here for obvious reasons and is clearly an underdog.

What if – against all odds – Gleneagles does run? Well, it would mean we have at least good ground. And that can only be a good thing! As it offers the fairest conditions for everyone.

He’s been the star three year old this season. Overshadowing Golden Horn in my mind. He’s been ultra impressive as a juvenile and continued where he left of last year. Question is: what did he actually beat in those races since? There seems not too much high quality around the mile division in the current generation of three year olds, to be fair.

But you can only beat what is put in front of you. And Gleneagles has mastered all challenges so far – even when things went against him, as happened in the Irish 2000 Guineas. But does he stay the trip? Well, fair question. As a son of Galileo you would hope he has a fair chance to do so. Though his dam was never successful beyond 6f and the dam sire has a stamina index of 7.7f. Gleneagles full-sister Marvellous also failed to stay trips beyond a mile.

What does this mean for Gleneagles? We don’t know. Only time will tell. That’s why it would be so intriguing to see him racing.

Conclusion: It’s all hangs on the Irish weather and how much rain Leopardstown takes. The track usually drains well. A dry night and and a dry, warm Saturday morning later and we may have less of a problem with rain softened ground. Irregardless of that, Pleascach is the one I side with as I believe 16/1 is way too generous. She won’t mind whatever ground we get, has top class form in the book, is hardy and tough and is sure to give the boys a run for their money.

One thought on “QIPCO Irish Champion Stakes – The Preview”