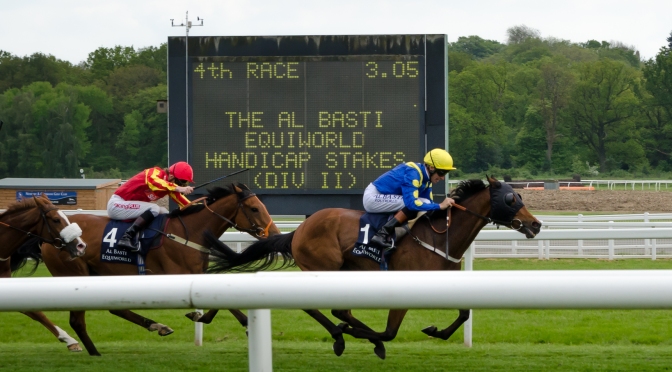 Dreaming drops in class and will have a better chance to produce a competitive performance over this trip than the big price suggests, I think.

The three-year-old gelding is still quite unexposed over trips beyond 6 furlongs as well as on turf. He also comes down to a good mark, after having excuses this year on a number of occasions.

He was heavily bumped right out of the gates at Kempton the last time, subsequently didn’t look comfortable and never landed a blow, although this was quite a strong class 4 Handicap, too.

He seriously caught the eye two back at the same course over 7 furlongs, when he was caught wide giving ground away all the time; after hitting a flat spot he rattled home much the strongest in the closing stages, suggesting the trip won’t be an issue and a mile isn’t out of question either.

He tried the 8 furlongs distance once, on his seasonal debut at Newmarket where he stumbled badly over two furlongs from home.

I don’t like to make excuses repeatedly for a horse but feel this lad is better than what he has shown this year. The market isn’t fond of him, but he’s a totally wrong price if on a going day, with the 3lb claim of Georgia Dobie rather useful too.

I am tracking the filly Ebtsama since her eyecatching February runner-up effort at Southwell. She caught the eye a number of times subsequently, yet the right day to back her didn’t materalise, yet.

Today looks a solid opportunity. She has no hope according to the betting but that couldn’t be further from the truth, if – and that’s the key – she can settle.

The hood is on and has to make a difference, especially over this trip. It’s not a given that there’s a blistering pace today, and that’s a clear danger to her chances. She may pull her race away as she has done on a number of occasions before. However, 7 furlongs should be, in theory, the ideal trip.

Ebtsama is completely unexposed on turf, apart from a promising Newmarket debut last year in June. She raced on the All-Weather ever since. She pulled way too hard last time out at Kempton but produced a nice change of gear in the home straight, which petered out as she ran out of energy, nonetheless giving the impression she has got talent.

She gave this impression in her other three starts this year too. The aforementioned runner-up performance at Southwell looks good with the form franked, and she was unlucky the next time at Lingfield, not getting a clear run, which was also the story at Wolverhampton. On that evidence alone she should/could/would be any number of pounds higher in the ratings today if things would have gone more her way.

Down to a mark of 71, she takes on older rivals for the first time today. As bottom-weight I think she has a good opportunity today to be competitive as long as she settles.