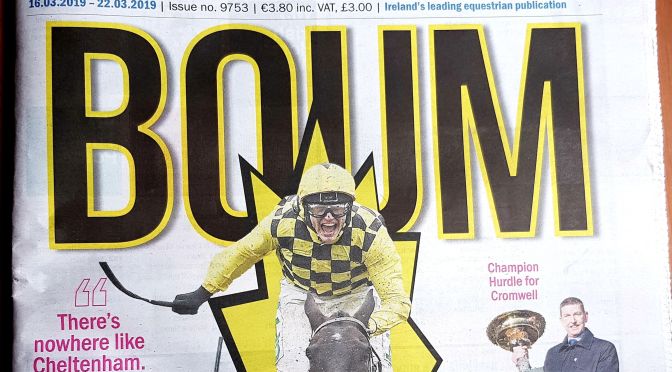 A magic week of racing is over – an excellent week from a personal perspective on the betting front: 145pts profit for a 72.50% ROI; but more importantly Cheltenham provided – as is usually does – the stage for incredible stories, memorable moments, tears of joy and sadness – four days full of drama are well and truly behind us!

Willie Mullins won the Gold Cup – finally! “I’d sort of resigned myself to not winning a Gold Cup” – the Irishman could be forgiven for his negative thinking because with more than a circuit to go it looked like another year of misery  as three of his four horses in the race were already gone!

Thankfully not Al Boum Photo, who was the “last man standing” for the Mullins camp – and my 22/1 selection for the Gold Cup (alongside Shattered Love who faded away in the closing stages) – was always travelling strongly in the hands of Paul Townend.

Sitting at the back of the field initially, Al Boum Photo made smooth progress, jumping well, Townend sitting confidently, letting his mount find a rhythm; turning for home he couldn’t hold him back for much longer as Al Boum Photo was tanking along, still hard on the bridle.

Despite a mistake at the second last, now asked for full effort, Al Boum Photo returned every call to win the Gold Cup a shade cosily!

The seven-year-old proved that his Tremore run on New Years Day wasn’t a fluke and that the glimpses of brilliance he showed last season in fact were real. It was also a hugely rewarding success for Paul Townend after what happened last year at Punchestown when Al Boum Photo looked all but to secure a Grade 1 success, only for Townend to take the horse out before jumping the last.

Can Al Boum Photo defend his crown? We have been here before. It’s such a difficult task as defending champion Native River had to find out.

Many believed he could do it, but there were early signs of concern as Richard Johnson had to encourage his mount from an early stage. In fairness, the brave Native River responded and battled to the line, ultimately finishing in a creditable yet well beaten 4th place.

Colin Tizzard lamented afterward not having used blinkers. Personally I don’t think it would have made a huge deal of a difference, to be honest. Native River didn’t have the legs to go with the three horses in front of him in the end. Neither had Clan Des Obeaux. His bubble burst.

Mitigating factors can be put forward for Presenting Percy’s flat performance. Not so much the preparation, which wasn’t ideal as had been discussed for weeks and weeks, but more so because he was found to be lame after the Gold Cup.

Rachael Blackmore, Lizzy Kelly, Bryony Frost – three top class female riders who won races at this years Festival. Blackmore scored twice, though it was Bryony Frost who got the girls off the mark in terms of a first Grade 1 Festival winner over hurdles or fences.

Still challenging for the Irish jockey championship, Blackmore with close to 20 rides over the course of the four days, set a new record for female jockeys – the fact female riders achieved a higher strike rate vs. their male counterparts (4-46; 8.7% vs. 5.3%; 24-452) is an interesting side note.

I don’t want to be patronising. Nonetheless, this is a story that goes beyond racing, particularly in these times where equality is such a strong topic.

It shows that if given the opportunity, female riders can be as successful as male jockeys. It shows not everything is about riding the strongest finish but also about riding a smart race: knowing your mount, judging the pace right and finding an advantageous position to challenge when it matters most.

What I loved most about Bryony Frost in particular when she won the Ryanair Chase on Thursday were the words the found after the race speaking to a huge TV audience: emotional, yet smart. The way she spoke about the horse, about adversity, putting her own emotions into words which felt warm and relatable at the same time – a message not all jockeys are equally gifted in transporting to the general public.

One Era Ends Another Begins

Age catches up with anyone. It has caught up with Un De Sceaux and Faugheen. Both eleven-years-old now; the fall has been gradually, nonetheless it’s clear their younger rivals have fresher and faster legs these days.

I fancied Un De Sceaux in the Ryanair Chase, actually. But truth is you knew his time was up when Paul Townend buried the 2017 winner of this very race at the back of the field. What eventual winner Frodon did you would have expected Un De Sceaux to do if at his brilliant best.

Faugheen fared a little bit better. He was there until the last in with a chance. Still, as soon as Paisley Park shifted into 6th gear the former Champion Hurdler was a beaten horse. He finished a creditable third, and he may well be able to go to Punchestown and win another race.

But as far as the Festival is concerned Faugheen won’t have many more stories to write, neither does Un De Sceaux. They don’t have to. Both horses have bee brilliant throughout their respective careers. They owe us nothing.

In saying that, the mentioned Paisley Park looks a staying hurdler for the ages. How he went from appearing briefly in trouble to looking absolutely irresistible within a matter of seconds was one of those “WOW” moments this week.

It can be the start of the new era. Comparisons with Big Bucks have been made. They aren’t far off the truth I reckon.

As record crowds flooded trough the gates, record numbers were glued to the telly as well: Tuesday, Thursday and Friday of this year’s festival saw  the highest average viewing numbers since records began in 2003.

Having the luxury of choosing between RTV and ITV at home, I chose to stick with ITV after day one. I thoroughly enjoyed their coverage. From the morning show to the coverage of the actual races – it was excellent, with good people before and behind the camera.

Yes, they speak a simpler language on ITV than they do on RTV. Francesa was asking some seemingly ‘dumb’ questions. One shouldn’t forget, though, the audience on ITV is a different one than on RTV. So overall, thumb up for team ITV – my biggest compliment for them: their genuine love for the sport comes across in every shot and every discussion.

I only noticed this fact when reading the opening comment in the Irish Field yesterday morning – even though the numbers were low in years before, not a single British-bred winner at this years festival must be a concern.

The likes of Klassical Dream, Duc De Genievres, Frodon or Al Boum Photo are all French-bred and were some of the most impressive winners of the entire week. Good news for the French breeding industry!

There is so much more to say. I could go on for hours. So many memorable performances. So many stories to tell. Also a few sad ones – they are unavoidable in our sport.

It’s been a wonderful week of horse racing over all. The sport is as popular as ever, if not even gaining in popularity again! Long may this trend continue.

Back to bred and butter now: class 6 Handicaps on a Wednesday night at Kempton, Wolverhampton or at Southwell, not that Britain’s only fibresand track owns a bunch of floodlights! Butnot for long.

Even though the sky over county Kildare Is rain filled at the moment (and has been for the entire last week pretty much!) spring is around the corner and with that comes the flat season – the Doncaster Lincoln, the Dubai World Cup and also the opening of the new Curragh. It’s gonna be exciting!