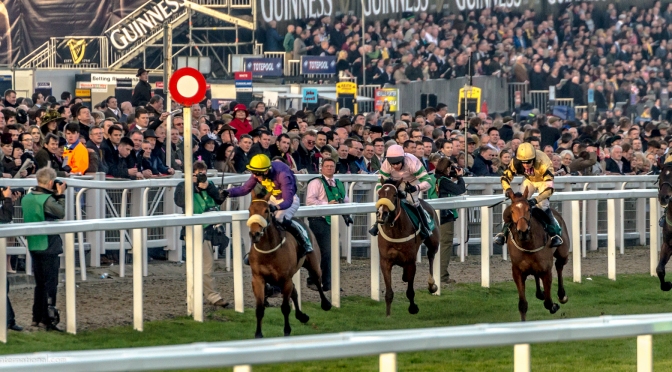 It’s day three of the Festival – it’s nearly over again…. how time’s flying! So let’s enjoy it as long as it lasts, with Yorkhill the class act of the day to shine…. or not? Some say he’s the best horse in training. He might well be. We soon find out.

The Stayers Hurdle (formerly World Hurdle) is the feature of the day. A red hot favourite who is probably backed into odds-on on Thursday itself – can he been beaten or may he kick-start a dominance over the stayers division as Big Buck’s did not all too long ago?

A race that’ll evolve around the jumping of Yorkhill. With a clear round he’s very hard to beat. But I’m not sure if he will get this clear round. His first start over fences was a Mickey Mouse contest where he didn’t learn much, his second and most recent start was one that didn’t impress many and clearly left me wondering too.

Jumping is the game, the saying goes – particularly at Cheltenham. That brings Disko very much into the equation. Noel Meade’s inmate was impressive at Leopardstown when last seen, he’s still improving and has the distance and ground in him.

Officially rated only one pound below Yorkhill you have to take him serious. Whether the big performance at Leopardstown in February has taken too much out him is a question mark. But he is a super jumper who may put the pressure on Yorkhill’s potentially weak point.

A big field handicap but one that can be easily broken down to a good handful of serious contenders. Favourite Tobefair looks a big chance. So does El Bandit and Impulsive Star together with Jury Duty from the other side of the Irish Sea.

In the end I’m nailing my colours to Impulsive Star and Jury Duty. Neil Mulholland’s lightly raced seven year old has been progressive throughout the season resulting in three wins out of four runs, while the one time he was beaten he encountered some excellent opposition.

He won’t mind the decent ground and stays really well. One who should relish the test of a big field where he can battle up the hill. A career highest mark he has to overcome, but this serious talent could easily be better than his current mark.

Ireland’s Jury Duty is equally lightly raced, though his win record isn’t as good. He’s encountered some strong opposition, though, and was slightly unlucky here and there in the past.

He picked up a niggle in his preparation and had to be rushed in order to qualify, which he did at Chepstow eventually.

The quick ground is a slight concern but this lad may have still some serious improvement left in him. It’s probably fair to say we didn’t see the best yet and that gives me hope for a big run here.

A bit a surprise to see Empire of Dirt declared given I thought he’d be the ideal candidate for the Gold Cup, even more so after Don Poli’s absence. He’s here though and rates a major chance.

A festival winner last year, runner-up in the Irish Gold Cup this year – he’s got stamina in abundance as well as class. Ground and trip are not necessarily a worry but I do wonder if the big race from last month left a mark? He also produced some of his finest performances as a fresh horse.

That’s like complaining on a high level, of course, yet I feel he’s not the ideal candidate that I want to lump on in this race.

Speedier Un De Sceaux is favoured in the betting. The former Arkle winner and Champion Chase runner-up has had a perfect preparation with two wins from two starts this season. He can be a bit edgy jumping wise, might not quite appreciate the quick ground and the trip is one that may stretch him with others surely making this a test of stamina.

He’s the most likely winner but nothing more than a fair price. The one I do like is Empire Of Dirt stablemate Sub Lieutenant.

Far from a sexy selection, but a value price in my book. He’s proven on good ground and still only an eight year old. He’s had an ideal preparation and put a string of fine performances together this season, including a success over subsequent Lexus Chase winner Outlander.

With that in mind and more than double the price of UDC and EOD I feel he can give those two something to think about on Thursday.

On all evidence Unowhatimeanharry is very hard to beat here. He’s a machine who’s proven class over course and distance. But he’s also a very short price. Too short for me.

Looking for alternatives I can see previous World Hurdle winner Cole Harden going close, but the one intriguing me most is quite clearly Ballyoptic.

He finished a couple of times behind the favourite this season and probably the same fate awaits here. But fact is he’s a Grade 1 winning novice himself who’s still a relatively young horse on the upward who was only 6l behind in second Unowhatimeanharry at Newbury in November.

After a disappointing performance over course and distance in the Cleeve Hurdle he got a bit of a break and his wind done – he’ll try a tongue tie for the first time here too – that in combination might bring out further improvement.

If it does and if he can get back to his early season form then he’ll be able to outrun his price tag and should be in the shake-up which is enough for a healthy place part of an each-way bet to pay.

Update: my original selection Le Prezien is out and instead runs in the Grand Annual tomorrow – so I re-evaluated the race and come to the conclusion at given prices, now that he made it into the race, Katachenko of a feather weight must have a decent chance to be in the shake-up.

He had a light enough campaign to date after finishing last season on a high thanks to Graded success over two miles at Aintree. His most recent run over a little more than 3 miles at Catterick, which is quite an undulating track, was a fine prep.

Stamina questions were answered that say in my mind. He finished a fine runner-up in soft conditions, but has proven himself on better ground in the past. Given he has form over much shorter too, he should be fine with conditions today.

At 40s with six places to pay with Skybet, I give him a chance.

I strongly fancied Let’s Dance for the Supreme and I believe she’s going to be very tough to beat now in the Mares’ Novices’, but she is not a price for me, so I let her run and hopefully win without the burden of my money.

Plain and simple Potters Legend is the one I want. While I also quite like Southfield Royale, I find it hard to trust him at a shortish price. Potters Legend, a lightly raced novice, will find this a tough assignment against seasoned handicappers but he could be one who has the talent to relish the challenge,

He produced fair performances this season and the last two times in Handicaps off his current mark. The step up in trip is intriguing and may or may not suit. But if he has to have a chance then because of improvement coming for the stamina test.

The good ground should definitely help to stay the distance. At a price he’s a decent bet in this race I feel.