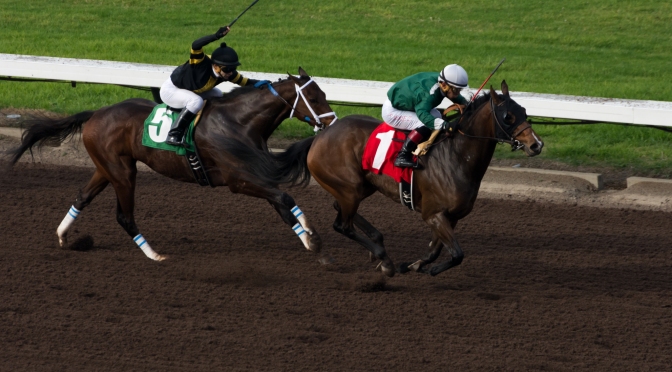 Can newly crowned 2017 American Horse Of The year, Gun Runner, finish his career in the most lucrative fashion? He certainly is the red-hot favourite for the Pegasus World Cup at Gulfstream Park on Saturday.

Whether even money is a good or a bad price depends on individual perspective. Undisputed is, however, that the reigning Breeders’ Cup champ has all the credentials to win a fifth consecutive Grade 1.

He drops down a furlong from his impressive Del Mar success, which isn’t a problem given his excellent record over 9 furlongs. SO, can he beaten?

Absolutely! Drawn wide, he’s got to be at his very best to prevail in a deep field. He’s had a tough campaign last season, including a trip to Dubai. That can take a toll on horses, as we have seen in this very same race only twelve months ago, when California Chrome flopped spectacularly.

Is he going to be at his very best coming off a near three months lay-off? Possibly – Steve Asmussen knows the horse best and will ensure his star is ready for one final big performance.

Nonetheless, at even money I have to oppose him, simply from a betting perspective, with other exciting options available to back against the favourite.

Pacific Classic winner – inflicting a painful defeat to Arrogate – and BCC runner-up Collected rates a big danger on that form. He has no problems with the trip, usually travells well and is gutsy.

He flopped in a Grade 2 at the back-end of the 2017 season; some recent reports from the US suggest he did not impress in his workouts. That’s not to say he can’t be back to his best when it matters most – but maybe those big runs have left a mark?

West Coast looks more likely to cause the ‘upset’. Impressive Travers Stakes and Pennsylvania Derby successes, followed by a third placed- and far from disgraced effort in the Breeders’ Cup Classic.

A drop to 1m 1f should suit this horse down to the grounds. From a perfect draw he should be in a perfect position when it really matters. Castellano gets the leg up. He is still only four, so could potentially improve. He’s a big player here and one I like allot. 7/1 looks a good price.

That says, 10/1 for Sharp Azteca looks even better in my book. The speedball has a perfect draw to suit his running style, though could face competition for the lead. He proved versatile, on the other hand, and seems to have no problem tracking the pace either.

He landed a first Grade 1 success at Aqueduct in the Cigar Mile in most impressive style despite carrying top weight. If the Pegasus would be run over a mile, Sharp Azteca would be hard to beat. It isn’t, though. Hence the additional furlong is the key question.

Plenty are of the opinion he won’t stay the trip. Once taken on by the big guns in the home straight he will falter. You can point to the Breeders’ Cup Dirt Mile where exactly that happened. Though there were some slight excuses, possibly, that day.

On the plus side: even though only on Grade 3 level, he won the Monmouth Cup over 1m 1/2f by more than seven lengths back in July last year. He didn’t appear to be stopping – and albeit better opposition awaits here – I do not see how Sharp Azteca is down as not staying 9f in the book of so many.

On pedigree there is certainly every chance he could even stretch out to 10 furlongs. Furthermore, Gulfstream Park is a track he already won twice at; it is a course to favour his running style in general. So I think there is every chance that Sharp Azteca is in the right place when it matters.

At 10’s I feel he is overpriced. Yes, he is not the most likely winner in the race. But he is the biggest value being fully unexposed over the trip, coming here in the form of his life, with a perfect draw and conditions to suit.