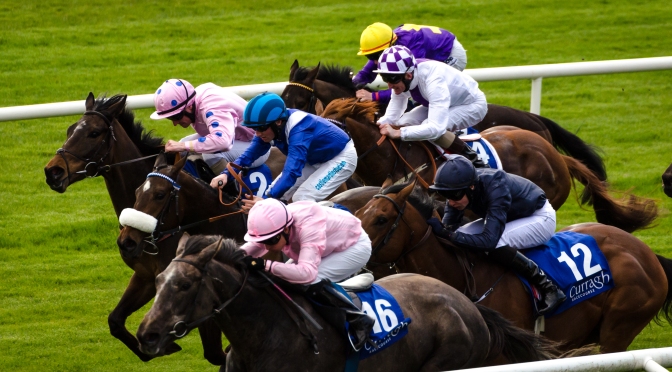 Good morning world – the flat is back! Racing never sleeps but Cheltenham was yesterday, the Curragh is today. I’m genuinely excited, going into my fourth year as a Curragh member, a racetrack that is so fucked up that it’s actually great. It’s called charm, I guess. I mean, once the whole thing is revamped, will it still have the same old shabby character which I love so much? Maybe I’m the only one who’s going to miss those power cables waving frighteningly close over racegoers heads in the ever present wind.

Anyway, there’s at least one more year to enjoy it all in it’s full glory. And knowing the Irish by now, after living five years+ in the land of rain, I understand that timetable- and plans are generally nice things to have but nothing to obbey to. Sure, we do that bit different in Germany, but hey, if you don’t like it, you can right feck off! I’m not complaining – I like it exactly that way!

But what I try to say: while there is seemingly a timeline in place to complete the “new Curragh”, the likelihood of it starting on time, never mind the actual completion, is probably slim.

Whatever, that wasn’t the point I wanted to make. Point is: I’m excited. The flat is back! My love – I do like the jumps too – but I like fast horses just a bit more.

The Curragh opener looks pretty decent. Three fair maiden races – some nice types where unveiled here over the last couple of years – quite intriguing handicaps, particularly the 1m one for three year olds with a market leader who’s got an entry for the Derby. The Irish Lincoln is as massive a field as you can get and quite a deep race too. The first pattern race of the new season brings some unexposed and more experienced fillies together. And that all on soft ground – how could it  be any different?! So let’s have a look:

2.10 – 5f Maiden: Jim Bolger won this one on a number of occasions in the past, most notably with Dawn Approach. But the year before his Whip Rule was successful, and that is noteworthy because Intensely Focussed hails from the same family and is therefore not surprisingly the favourite here.

Other individuals to keep an eye on are Terrific Feeling for trainer Michael O’Callaghan, who won this last year. This son of Sir Prancealot has a bit of speed on his side, so could go well. Kieren Fallon is on board. He’s the retained rider of the O’Callaghan yard this season. Prendergast’s Tawaleef and Weld’s Tilly Trotter can go close.

2.40 – 6f Maiden: I’m most intrigued by Jim Bolger trained Stenographer who cost a staggering $450.000 as a yearling. Could be the right type for this race. Though it’s interesting that Richard Fahey brings over the 90 rated Paddy Power, who’s got some fine maiden form from to his name. Also an intriguing contender is The Moore Factor who finished runner-up at Galway with plenty of promise on his sole start.

3.15 – 6f Handicap: Open enough race where favourite Laganore has excellent form in the book yet appears short enough in the betting given he drops markedly in trip and is going to race on really soft ground for the first time.Richard Fahey’s Patrick is an intriguing runner if he acts on the ground.

For a huge price I like to call out Deeds Not Words. Bottom of the weighs, races off a nice low mark, but should enjoy the return to 6 furlongs and has won on soft ground before. Far from disgraced in his last starts at Dundalk. 20/1 is huge.

3.50 – 1m Park Express Stakes: Fair to say Devonshire is the one to beat. She sets a high standard given her 3rd place in last years 1000 Guineas. Her win record isn’t all that positive though. In fact she never won over a mile, though the going is to her advantage.

Joailliere hasn’t been seen since she bombed out in the Irish 1000 Guineas. However she looked very talented when winning a Gowran Park maiden on her debut and she might be the type that gets better with age.

Such a late bloomer could be Aiden O’Brien’s Fluff as well. She’s had only one career start, as she produced a stunning turn of foot at Navan last year. She can be anything but is certainly an exciting. prospect. At 6/1 I like her a lot.

From the bigger prices I feel you can’t fully rule out Queen Blossom. Lightly raced, she looked a scopey sort last year, who appreciates cut in the ground. She surely showed some promise in her two starts.20/1 is too big.

4.25 – 7f Handicap: An intriguing contest with exciting Awtaad leading the betting. The son of Cape Cross looked excellent when winning a 7f maiden last season and subsequently was talked up as a potential Derby horse. In fact he has an entry for the big one in June, so it’s slightly surprising to see him starting his campaign in a handicap.

Albeit it’s a deep one which provides a really tough test. Top weight Awtaad won’t have it all his own way here. Johnny Murtagh’s Newsman is a nice Makfi colt, whereas Ger Lyons’s Roderic O’connor gelding Mint Chai is anotherone worth mentioning.

The biggest challenge could come from a filly though. It took Verbosity a while but the penny finally dropped at Cork in October on her handicap debut. In soft conditions she was able to produce a stunning change of gear and her revised mark is probably on the lenient side. She looks like a filly that’ll do better with age anyway. At 9/1 she’s the one I put up against the classy favourite.

4.55 – 1m Irish Lincoln: A hot renewal where Dermot Weld’s Ashraf looks the class act. The four year old is still unexposed but looked a Group winner in the making last season. Although a mark of 97 is quite a tough task to overcome.

There are plenty of alternatives. Cailin Mor was an impressive winner when last seen in Cork and an 6lb raise might be lenient. Then there is last years Lincoln winner Onenightidreamed. Still lightly raced, he won both his starts in 2015, including the Lincoln and followed up with a Group 3 success. He loves the soft ground but has a huge mark to overcome. Nonetheless at 11/1 he’s a tick overpriced in my book.

Two big prices I also like are Vivat Rex and Lady Giselle. The latter one is 4lb out of the weights but is a real soft ground horse who has a pretty good record over 1m too. Vivat Rex in contrast isn’t quite sure to appreciate the going but is generally unexposed on turf and drops to a fair mark after a pipe opener at Dundalk for new connections earlier this month. Both are 40/1 shots.

5.25 – 1m Maiden: Could we see some future stars in this field? Favourite Embiran could be one. He finished extremely eye-catchingly on his debut and sole start in 2015. Aiden O’Brien’s Bravery is not one to underestimate. He ran on well in a 7f maiden when runner-up behind Awtaad. He looked green but clearly talented that day.

Stable mate Claudio Monteverdi was absolutely clueless on his debut last year but shaped very well in the finish and might be an even better prospect than Bravery I feel. Stellar Mass sets a good standard as he was only a lengths beaten 4th in the Group 2 Beresford Stakes last season.